Last night was Amanda Palmer and the Grand Theft Orchestra in concert at Thebarton Theatre. Amanda is a wild artist, most recently famous for crowd funding her latest album Theatre is Evil. She’s bisexual, (like me) married to author Neil Gaiman, has a brilliant sense of humour and is deeply unconventional in her approach to music, relationships, beauty, and life. I admire her.

Yesterday I slept from 5am into the early afternoon. I woke to paint my sister for the gig so she could line up early. Rose was pretty unwell and slept through until about 20 minutes before the doors opened. It was rushed and wonderful and decadent. This concert, with all the wonderful misfits that would be going, is a perfect place to wear paint. I started with the face and couldn’t restrain myself spilling down onto neck, back, arm, chest. The white has blinged under the flash a little, it wasn’t as stark in real life. I love doing this, I want to keep doing many more. 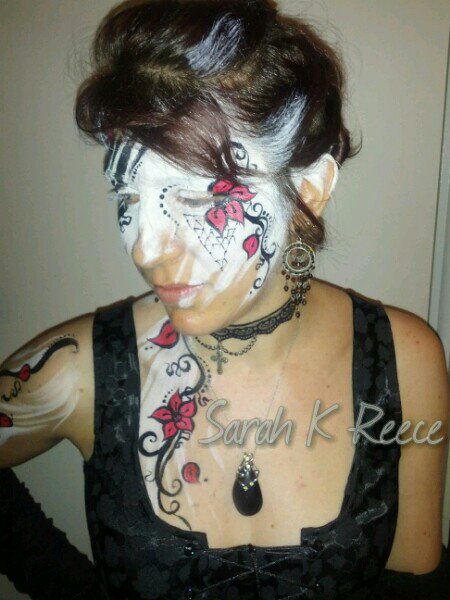 The lineup was unique in my experience. Instead of a supporting band, a range of other artists entertained us, including members of the Grand Theft Orchestra playing their own work. It was amazing. There were mad songs about bananas, deeply moving music about loneliness, surprise nudity. We laughed hard, a girl next to me gasping for breath and holding her stomach. Band members climbed into the box seats to sit on the balcony and ring tiny bells through a song so affecting no one in the theatre even whispered. We just breathed, as it sang us. All the artists had things for sale in the foyer or had sold out of them. It felt respectful of all the artists involved in a way that’s still ticking in my brain. It was the last night of the tour, and everyone looked exhausted and triumphant. 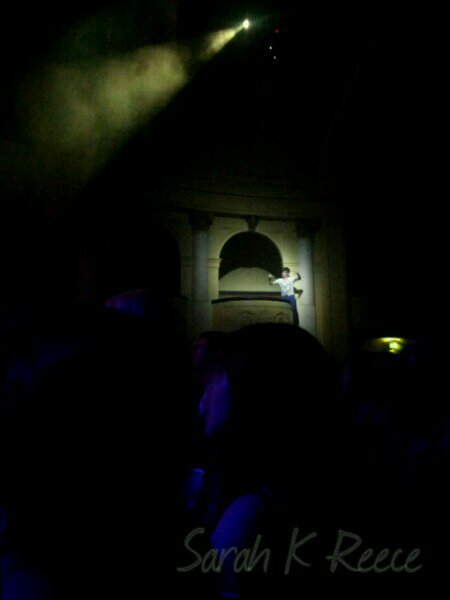 Amanda and the band were amazing. They played, laughed, hugged, humped, danced, and sang their hearts out. I ran into a number of other friends there, old and new. The room was full of people like me, poets, artists, visionaries, people who wanted to connect and be inspired. 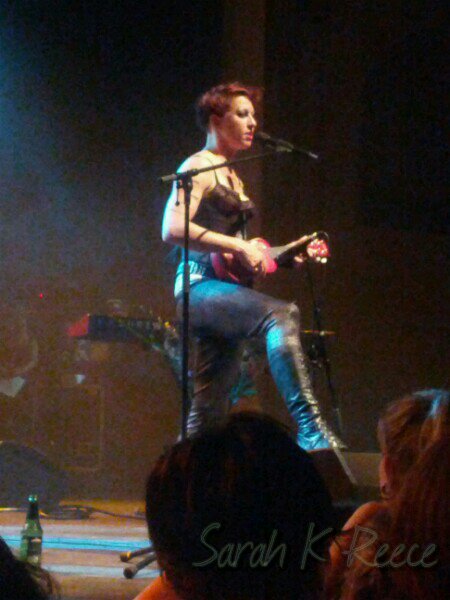 Amanda was herself, raw, lusty, generous, connected. She sang two of my favourite songs from the new album, Do it with a Rockstar, and Not the killing type. Her work is intelligent, passionate, and layered with meaning. These are not safe for work or kids.

She’s not afraid of us. There was no barrier before the stage. We pressed ourselves against it and reached out to her. She dived into the crowd, wearing a coat with a massive sheer train. We held her while she sang, under the umbrella of her coat. She touched us, kissed us, trusted us. We gave her back to the stage. 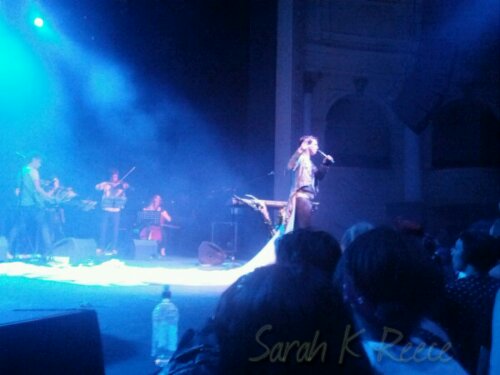 She sang a love song and asked to have all the lights turned out. We stood there in the dark, swaying, and singing ‘I love you so much’ together. She told us, if we felt brave, to hold a strangers hand ‘in a non -rapey way’. I held the hand of a beautiful woman next to me I’ve never met before. She told us, for tonight, we were all friends. 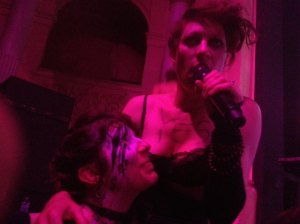 She told us stories, funny ones, sad ones, ones about people she admires or loves. She told us that since her crowd funding success, people keep asking her what the future of the music industry is. She said she has no idea, but as long as people keep paying to hear music we’ll be alright. She said

I’m just trying to be an artist; to have a job I don’t hate, to entertain people, to pay my bills, without being accused of being a narcissist.

I love that. It makes sense to me.

The concert ended. We ran back to the foyer and bought T-Shirts. We were promised a surprise if we waited around. We admired the crowd, the hair, the clothes, the comradery. Amanda and the acoustic part of the band set up unobtrusively in a small room. We all crowded in, lining the walls and sitting on the floor. For someone with PTSD this was a nightmare. There was no possible way out, I was surrounded by strangers, pressed close enough to be touching several at once, the smell of people. And yet, I was ecstatic. It frightened me but in a way that made me feel alive. Amanda sang, with her utterly raw, ripped up, end of tour voice. She played her ukulele. She was accompanied by magnificent strings. 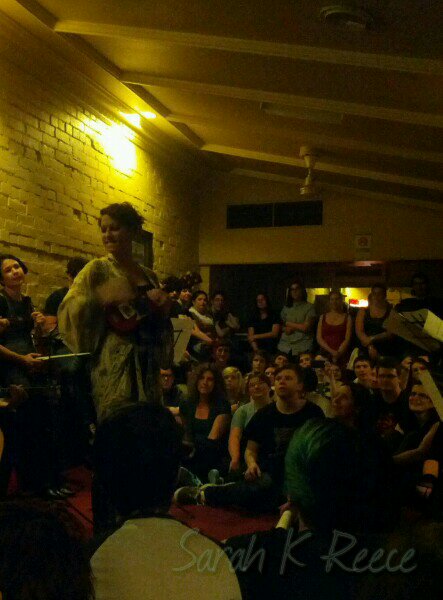 We listened, with our whole hearts. My feet were swollen and extremely painful, standing for the whole concert had been agony. I was sitting on them now, knees and hips screaming. Amanda started to sing Radiohead’s Creep. Her voice cracked. We all picked it up and sang it with her.

This packed room of mad people sang “I’m a weirdo/what the hell am I doing here/I don’t belong here” together.

Once, when I was a young child, in a fundamentalist Christian church, with their expectations of friendship and closeness, instead of the distant secular professional boundaries world I now live in, have I felt that sense of belonging. Not often since.

The woman next to me I’ve never met hugged me.

Amanda told us not to give up and be overwhelmed by things like Abbot running our country. She said, we were there, with Bush, for 8 years. She said gather together, love each other, fight for what you believe in. Grow stronger. Stop hating, stop complaining. Make great art. She looked right at me and told us that artists matter, that art changes the world.

We were a community, connected by things by passion. Not by mental illness, loneliness, poverty, loss, although I bet plenty of us there experience those things. It didn’t matter that I have multiple personalities or a history of trauma, homelessness and poverty. I wasn’t a victim, or even a survivor. I was a fan, I was a fellow artist. A few years ago when I went into college to get a Disability Access Plan to help me with my visual art degree, the woman I spoke with was fascinated by the DID. At the end of the appointment, which was all about my physical illnesses and psychiatric problems, she told me I was so interesting. I said to her, rubbish, that’s just my problems. You haven’t seen my art yet.

We lined up for Amanda to sign things. I could barely hobble. She looked exhausted. I knelt by her table while she signed my T Shirt that says “We are the Media” and said to her

A friend of mine killed themselves last week. I wish they could have been here. I just sat with you and a room full of strangers singing ‘I don’t belong here’ and felt a stronger sense of belonging than I have in a very long time. Thankyou

She listened. She looked grieved. She held my face, and told me I was welcome. I got to tell her. I didn’t get to tell so many of my other heroes who have died, like Bradbury, how much they mean to me.

Home then, exhausted and into bed. I reached out to some local arts communities I saw there. I followed Amanda on twitter to say thankyou again, not wanting the night to end, not wanting to lose the sense of hope and life that burned brightly within me.

But sleep did not come. Rose and I were awake until 5am talking about life and art and love and babies and freedom. We finally fell asleep in each other’s arm, at peace.

I want out of the conventional life I keep somehow sliding into. I want more artist friends. I want to make great art. I want to feel alive.