Language is so powerful. When Poppy was born we found many people would frame our experiences or her behaviour in ways that were not helpful for us. It’s amazing how many of our common phrases ascribe bad intentions to the child. It may seem like nit picking to fuss over a word, but words build the story that impacts how we understand each other. They create the filter through which we interpret each others intentions.

I first learned about attribution theory in uni, studying psychology, and a lot of things clicked in my mind about people I’d known. Most anyone when depressed or overwhelmed sees the world and other people through a filter that makes the innocuous seem hostile and the mildly difficult downright sinister. Some of us are more prone to this more of the time, living in a world where grey runs to black. How we feel can strongly change the way we interpret others and the world around us.

Many of the stories created by common phrases used about children would pit Poppy against us, as if she was indifferent or even cruel. People would say things like she was “being a jerk” if she wouldn’t stop crying, was “too smart for her own good” if she climbed something and fell off, “had us wrapped around her little finger” if we went to comfort her after she fell over.

On one level this is a way to be light-hearted about the stress of parenting, laugh it off, and validate how awful and exhausting it can be! But for some, in the context of stress and sleep deprivation, this can also take the relationship between parent and child into dark and risky places.

It can be difficult to understand just how painful things can get if you haven’t been there. In the early months of Poppy’s life, I was often sick, very sleep deprived, and feeling at the end of my tether. I’ve noticed that a kind of flip in thinking can happen when things are really bad. If you feel stretched past capacity enough, at some point it feels like it’s not possible for everyone to survive. Survival instinct and maternal instinct start to contradict each other. The maternal (or parental) impulse to protect and nurture is powerful and we tend to see it as the norm. But it’s not always the way, and when threat levels are high and bonding is distorted it may diminish or become secondary. The impulse to protect the child may dissipate next to the sense that there’s simply not enough resources for everyone.

Things can get really desperate if the child’s behaviour is framed as a threat in some way to your own survival. The shift in thinking from ‘we are all in this together, having a tough time’ to ‘they are sucking me dry’ is a risky one both for the relationship and the child.

This interesting article, the neuroscience of calming baby explores what’s going on behind a common phenomenon – babies are calmer when carried and held but will often become distressed when put down. It talks briefly about how important it is to understand that this is an inbuilt mammalian response, to “save parents from misreading the restart of crying as the intention of the infant to control the parents”. Soberingly, this is important because “unsoothable crying is a major risk factor for child abuse”. This is not in any way to blame a child for being harmed, or to excuse harm done to children. It is to examine the context in which otherwise devoted, well intentioned parents can find themselves struggling with furious impulses or not coping.

Ascribing bad intentions to a baby starts to activate a sense of threat, that the child is wilfully harming the parent, deliberately denying them basic needs of food, sleep, and relief from distress. When bonding is good and parent needs are getting met, these things don’t matter so much. But in harder times they can contribute to a sense of being tortured by the child rather than by the circumstances. It’s desperately important to see a child’s distress as distress rather than an attempt to control, manipulate, or do harm. Language is part of how we do this, helping to interpret and contextualise so we don’t distort what we’re experiencing.

It’s also critical not to set up impossible expectations such as “when you cry I will make it better for you” with a child. Overburdened by this sense of responsibility, parents are at risk of feeling intense distress in the form of failure, agitation, and frustration if confronted by distress they cannot sooothe or silence.

Rose and I translated a lot of common sayings when we encountered them. Someone would say to us things like:

This was incredibly helpful for me in a few instances where I was struggling. In early weeks I was prodromal (warning signs of psychosis) partly due to severe sleep deprivation. I would get Poppy confused with Tamlorn, the little one I miscarried. Rose and I would tag team Poppy all night to give each other some sleep. There have been times I’ve handed Poppy over in sobbing distress and Rose has taken her out for a morning drive because my nerves are shredded by her crying and my nipples are mangled from her biting and I’m losing it.

It makes a difference to understand that Poppy is behaving as she is supposed to, not to harm me. Human babies often want to be held all the time and use crying to signal fear, pain, hunger and every need they have. It’s also a biological norm for infant crying to send us round the twist, and being able to see our own limits coming up without hating ourselves for them is valuable. Infant needs can be more than a parent can meet, or impossible to understand at times. Nurtured infants need nurtured parents and few of have invested in those kinds of communities before bringing a baby into the world.

Parent needs are deeply important to meet in order to buffer that sense of threat and reduce the fight/flight response being activated in distress. Staying out of crisis mode is partly achieved by treating adult needs as real and significant, and using language wisely to tell the most helpful story about the situation.

So we found it helpful to say ‘squeaking’ instead of ‘screaming’ for example. “Our little person is squeaking again” sounded less dramatic and helped us keep perspective. We talked about “witching hour” and planned around the time every evening that Poppy would be overwhelmed and inconsolable. We used baby wearing to manage her desire to be close in a way that reduced our fatigue and back pain, learned how to rest her face on our shoulder so her screaming didn’t go right into our ear, and use as a mantra “I’m here with you, you’re not alone” in place of wanting to fix it when nothing was working. 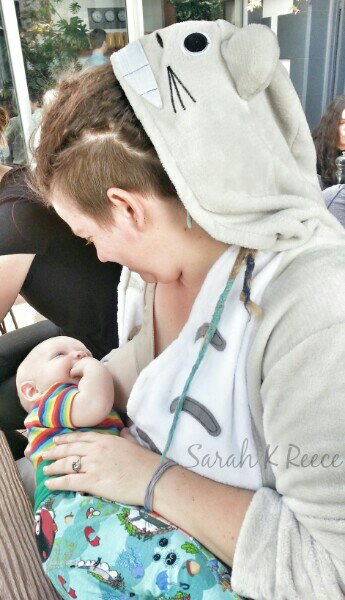 In our case, ‘colic’ was managed by reducing stimulation. The lights went off every night at 6pm, Poppy had a warm bath as soon as she started becoming distressed, and we didn’t go out in the evening for many months until she passed through the phase.

Language is a big part of what helped us navigate these huge challenges well. The risk of psychosis in the early days, serious difficulties with breastfeeding, and a baby with undiagnosed functional lactose overload and colic caused by sensory overwhelm. Combined with 2 deaths in the family and a range of illnesses for Rose and I, it was not an easy start. We were and are ecstatic to have Poppy, she is an absolutely beautiful, loving, curious, adventurous child. Tending to the stories we told and the language we used helped us to bond together during those difficult times.