Having our whole family sick together is an exercise in the logistics of rationing and portioning a tiny amount of energy to extract the maximum benefit. If I take her for an hour late tonight, then you do the morning, I’ll get you a nap at noon then you take her to the park for two hours so I can work on my assignment… The shifting priorities of dishes, doctors, meals, laundry, and mental health. It’s considerably more exhausting than being sick without kids, largely because of the difficulty of getting enough sleep to properly recover. 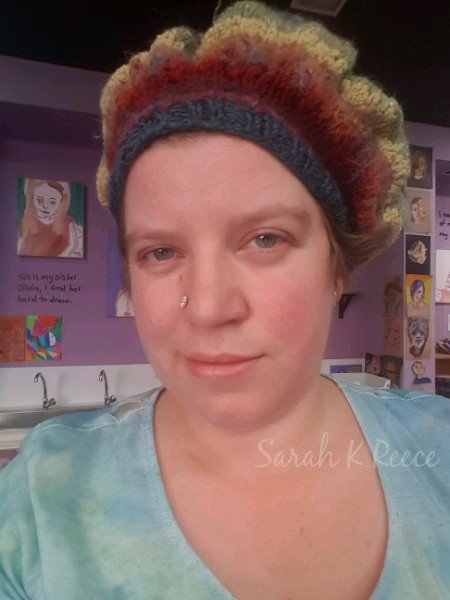 Monday Poppy and I went into the city. Rose had important appointments and Poppy was full of restless toddler energy. We had an argument on the bus about her not biting me which concluded with her screaming while strapped into her pram and me not making eye contact with a bus load of strangers. She got her own back by refusing to fall asleep for her afternoon nap. Usually she’ll snuggle down in her ‘cave’ made by covering the pram with a cloth, and knock off. That day she leaned as far forwards as her pram seatbelt would let her to fight sleep. 4 times she gently drifted off anyway as I paced around Rundle Mall rocking and circling the buskers. Each time she’d slip sideways as sleep relaxed her, clonking her head on the frame of the pram and waking up with a howl. Gently tipping the pram up evoked rage rather than sleep, and the fifth time she started to fall asleep I stopped and tried to gently settle her back which cued 20 minutes of hysteria.

I thought she might fall asleep in the art gallery but unfortunately that was the end of the whole idea. She talked to the other patrons, wanted to know all about the art, and once we found the kid’s studio space spent a happy hour cutting a sheet of paper into very tiny pieces.

The studio was set up to invite self portraits, with mirrors and oil pastels. This was mine: 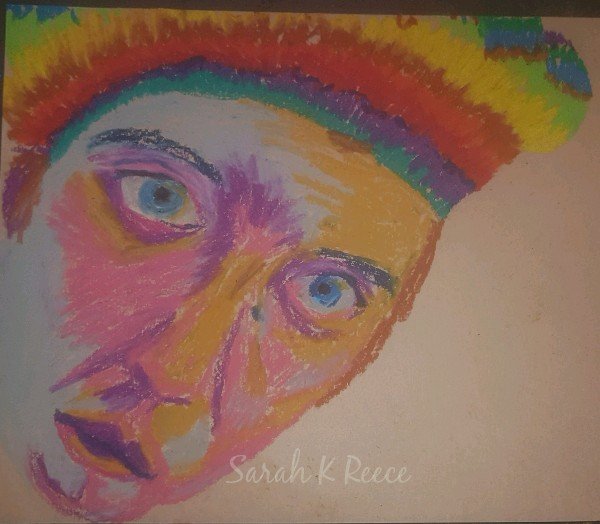 I was glad of the space, it’s the most at home I’ve felt in the gallery.

I’ve realized that PTSD has interrupted our usually very calm parenting approach. Kids this age can be intense, they have huge feelings, test boundaries, and have way more energy than seems sensible. Poppy is fearless, explorative, passionate, creative, and stubborn. Generally Rose and I navigate these traits patiently and with appreciation of their positive aspects. But when she hurts us deliberately we’ve both struggled and the conflict has been charged and difficult to resolve. We’ve been worried about what it means and stressed by our own responses. I in particular lose patience and get angry, but Poppy isn’t easily intimidated which leaves me in a bind where I either behave in more frightening ways until she’s cowed and takes me seriously, or I find another way of approaching this. It speaks to the heart of parenting approaches to obedience and discipline. Do children follow instructions because they are frightened of us, or of the consequences? Or because they are connected to us and trust us? Is it appropriate to scare your child? If so, when and how much? Are boundaries about anger or love? Is breaking the rules or pushing the boundaries about immaturity, defiance, conflicting needs, forgetfulness (it’s easy to over estimate the memory capacity of a small child), or something else?

I’ve been starting to do a bit more reading on parenting her age group and it occurred to me that Rose and I are generally excellent at not taking difficult behavior personally, setting boundaries with warmth, and redirecting troubling behaviors. So when Poppy was getting into constant trouble for climbing furniture in the house, she now has a climbing frame outside for her to monkey around on. But when she hurts us there’s no such framing. We see no positive aspect to such behavior, no legitimate need looking for expression. We talk instead about her being mean, we privately discuss her sensitivity to our stress, her restlessness, her trying to get our attention. We’re troubled by a normal child behavior and framing it as lack of empathy. It’s triggering, evoking memories of being hurt by others and we both move into threat responses. Rose tends to freeze and withdraw, I get angry.

It occurred to me recently we’re misframing the behavior due to our histories. Most children this age want to roughhouse. Wrestling and tumbling and play fighting is a normal developmental behavior. Engaged with care it’s a place for learning about how to hold back and not hurt each other, how to apologise and caretake when accidents happen, and it satisfies the touch hunger and intense energy of very young children. Learning how to wind down into calmness following rough play is a key part of regulating such excitable and energetic kids.

Last night when Poppy started to get rough with Rose who was crashed out on the couch with a migraine, I didn’t get charged. I chose to see her inappropriate behavior as a need for rough housing and set a boundary with patience rather than frustration. I told her Mamma was sick and could only have gentle play around her. When Poppy kept being rough I removed her to the bedroom not as punishment but as an appropriate location for rough play. I gently with her permission threw her onto the bed, threw a big stuffed lion at her and told her this was where the fierce and grouchy creatures play. She was thrilled. She ran growling at me to the edge of the bed, waited for me to put my hand in the centre of her chest, then braced herself for me to gently push her back, screaming with laughter.

Later that night with Rose asleep and me exhausted on the couch with Poppy, she started to rough play again and I forbade her from getting on the couch with me. For the first time she was easily redirected into quiet play and spend a calm hour making complicated meals with her toy food instead.

There’s no problem with her empathy, Poppy is an incredibly affectionate and loving child. She’s not unusually aggressive or showing signs of attachment damage or deprivation. In mislabeling her normal needs as something that disturbed us, we introduced a charge into our relationship that she gravitated towards. Kids do this without knowing why, they can sense it and it’s irresistible. It’s why they do mad things like grin at an adult who’s already at the end of their rope and angry with them. They are still getting a sense of their own power in the world and what they can and can’t do. Navigating our own trauma as parents is about recognizing blind spots like this, paying attention to threat responses needlessly activated, and prioritizing basic needs like sleep, connection, and companionship so we function as best we can. For me at the moment on bad days I’m dealing with chronic irritability and low grade suicidality. Sleep deprivation and feeling isolated turn my world black. Over and over in a thousand little ways we choose safety together, celebrate freedom and autonomy, look for loving ways to speak about the unspeakable things, and link into the world around us. Without our wider networks of friends, family, therapists, without kids rooms in art galleries, and foodbank, and doctors who see trauma survivors rather than welfare bludgers, we couldn’t do this. But together there is so much strength, sufficient grace. Enough to let us all grow.