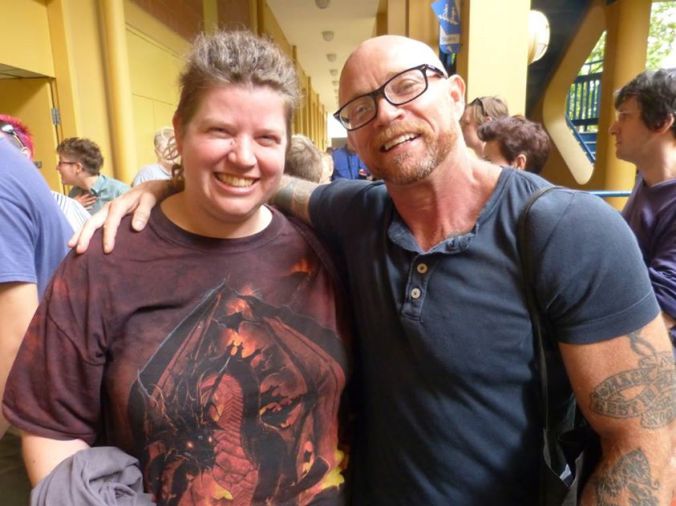 This awesome dude is Buck Angel. He was in Adelaide recently doing a number of shows at part of our Feast Festival, which is our annual queer pride event. I was fortunate enough to get along to several of them. I first met Buck as an amazing life size golden statue of him by artist Marc Quinn, that’s in our Art Gallery of South Australia. 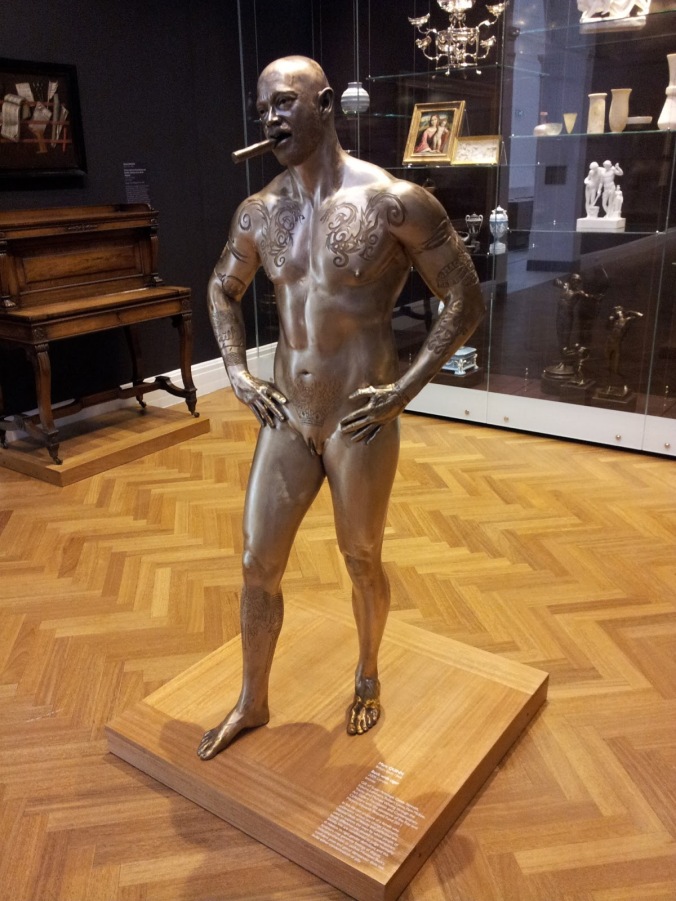 Photo from this blog.

I was blown away when I first saw it, that confidence, the way his tattoos have been carved deeply into the statue… So beautiful. To display his unusual body (Buck went through ‘top’ but not ‘bottom’ surgery) with such a sense of contentment and certainty about who he is just blew me away. Apparently it’s not unusual for people to be deeply moved, particularly trans folk.  Then I heard the subject was coming here and I got to hear some of his life story, his transitioning, to hear about how this statue was made and brought all the way to SA. It’s been amazing.

I talked with him a little about the overlap between the trans and multiple communities, the need for more understanding and acceptance. I’ve been building more links between these communities in my work on the Dissociative Initiative. My experience has been that there’s a lot of trans people who experience multiplicity, and a lot of people with multiplicity who have trans parts/personalities. The mental health and the trans supports however, don’t always get along.

Buck got it. His messages of loving your body, and embracing your identity, and not letting the world tell you you have look a certain way or have certain body parts to be who you know you are is a powerful one, especially for trans members of multiple systems. Some of us transition and some, like me, never will. (More about my experiences in What is a man?) I live as a male in a system full of female personalities and a body identified as female. Learning to be comfortable with this is so much easier when you have a hyper masculine, “I love my vagina”, pro diversity role model like Buck.

We talked a little about the massive changes legally and socially that have happened, just in the time since he’s transitioned. It makes me hopeful that things are going to change for those us with multiplicity, who currently are seen as mentally ill, treated as dangerous, or the punch line of a joke. There’s a whole community of trans people who can relate to our experiences around those issues! These are people who understand fears of being outed, how our relationships, housing, and jobs can be at risk, the pressure of trying to pass so no one will know we are different. That’s the reason I’m public about being multiple, to start that change happening. We shouldn’t have to hide! We can find ally’s in communities like this and support each other.

Buck told me – it doesn’t take many of us speaking up to change things. Just a few voices make a difference. I believe that.